Mike McKenna worked in partnership with Visit Idaho to create this Travel Tip.

If you love to fish, especially for trout, then Idaho is your kind of place.

There’s enough fishing in the Gem State to last a lifetime.

Idaho is pretty darn big. At 83,642 square miles, it’s roughly 10-times the size of New Jersey and every nook and cranny of the 43rd state offers some form of world-class freshwater fishing. 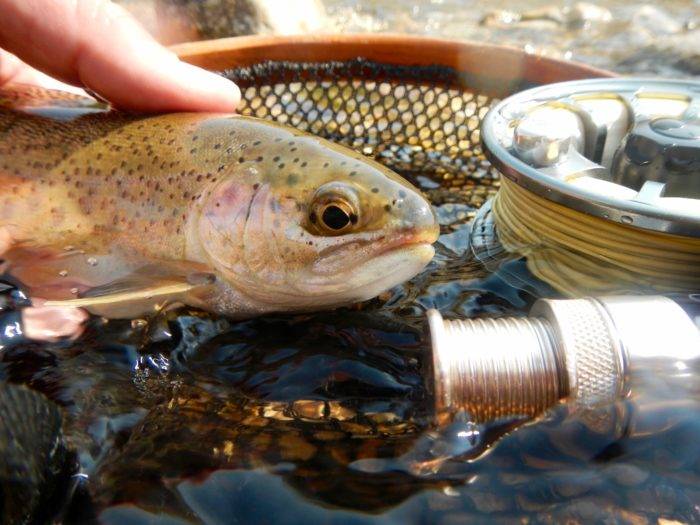 There’s no shortage of places to fish in Idaho. Photo Credit: Mike McKenna.

You can chase carp along the Snake River or go for bass at ponds and reservoirs scattered across the high desert. You can hunt for wild trout in countless high mountain streams and meadows. You can work the deep lakes of the Idaho Panhandle for mackinaws or you can search for sea-run species like steelhead from some of the last free-running rivers left in America.

To help you make the most out of your time casting around Idaho, here’s a basic 101 rundown of fishing the four main regions in our rather oddly-shaped state.

Southern Idaho is where warmer waters can be found. It’s also where the most people can be found. The southern stretch of the state is dominated by high desert terrain. It runs roughly from the Oregon border east, covering most of the Snake River Plain towards Pocatello.

The Snake River is the fishing focus of this region. As the river flows from east to west, arching its way like a big smile across Southern Idaho, the Snake is held up by dams that have created some large manmade lakes. American Falls Reservoir, CJ Strike Reservoir and Brownlee Reservoir are some of the best smallmouth bass fisheries in the state. Smaller bass and sunfish ponds are also scattered across the farm and ranchlands around the river.

The Salmon Falls Creek Reservoir, which is a southern tributary of the Snake, is one of the only places in Idaho you can catch walleye. Farther west along the Snake River Plain, Lake Lowell is one of the best places in the region to catch largemouth bass. And farther south yet, the wild Owyhee River is home to brown trout that drive fly fishers mad. Meanwhile, the Snake River itself has become a hot spot for carp fans, especially for fly fishers and bow fishermen.

Some people call southern Idaho’s high-desert terrain the “Sagebrush Sea,” a fitting title for the surprising amount of fishing it has to offer.

The waters of eastern Idaho are hallowed ground. The Henry’s Fork, the South Fork of the Snake, the Teton River, Henry’s Lake, Palisades Reservoir—the mere mention of them can drive fly fishers into a froth, or into long-winded stories about the best fishing trips of their lives.

The region abuts two other states known for fishing; Montana and Wyoming. Though neither of our neighboring states can rival Idaho’s angling options. Idaho has 3,100 river miles, more than any other state in the country. 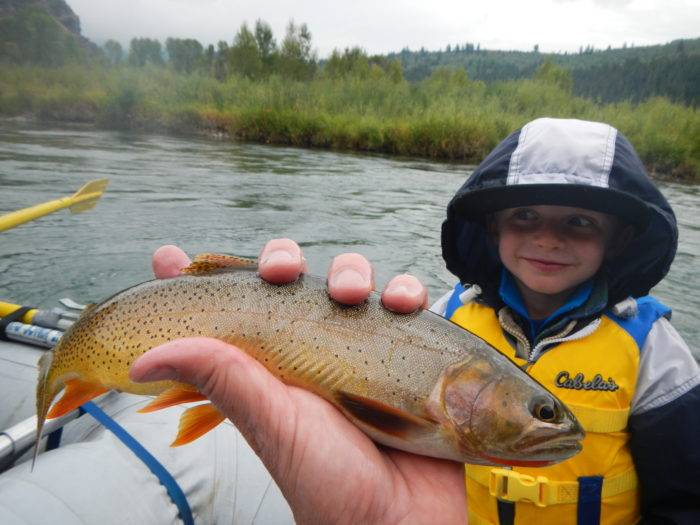 Try your hand at catching a cutthroat on the South Fork of the Snake River. Photo Credit: Mike McKenna.

Fly fishing is what eastern Idaho is most famous for. Casting dry flies from drift boats or while wading is the most popular way to fish the moving water of this region. The challenge is part of the appeal at these primarily catch and release fisheries. Landing a big, or even a small, rainbow or brown at one of eastern Idaho’s popular fisheries can be one of the most rewarding moments of an angler’s life.

The Henry’s Fork and South Fork of the Snake are on almost every fly fisher’s Bucket List for good reason. It’s tough to find a more beautiful or easily accessible place to test your skills casting for trout.

The middle of Idaho is home to the largest wilderness area in the Lower 48. The Frank Church-River of No Return Wilderness covers over 2.3 million of some of the wildest acres left on the continent.

The Northern Rockies run through the state and the wilderness area. Its peaks, valleys and rivers dominate the topography of rugged Central Idaho. While access to much of the region can be challenging, it’s always rewarding, especially for anglers.

The Salmon River and its famed Middle Fork are the star attractions of the Frank Church. People travel to Idaho from all over the world to spend a week rafting and fishing the Middle Fork of the Main Salmon—the “River of No Return.”

Rainbow and cutthroat trout are the prizes of most Idaho mountain lakes and rivers, with caches of introduced golden trout said to still be found in some high mountain lakes. In the Main Salmon, trout are joined by seasonal runs of steelhead as well as sockeye and Chinook salmon, which make a nearly 900-mile trek from the Pacific Ocean to the heart of Idaho.

Along the southern edge of central Idaho, you can find a handful of other well-known fisheries. Fanning out of the mountains from east to west, the Big Lost River, Silver Creek, the Big Wood River and the South Fork of the Boise are all fly fishing meccas. 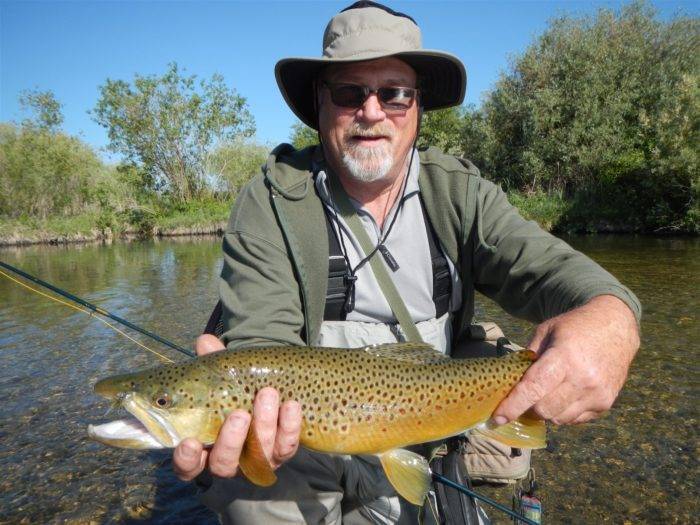 Silver Creek was made famous by Ernest Hemingway, even though he preferred to bird hunt the creek more than fish it. The gin-clear waters of Silver Creek and its large and selective brown trout make it the best Blue Ribbon stream in a state filled with fantastic fisheries.

Things just generally seem to be bigger in the “panhandle” of Idaho. The lakes seem larger, the forests seem thicker, the rivers seem wider and the trout seem more monstrous than what you find elsewhere in the state.

The terrain is also much different in northern Idaho. The high desert and rocky peaks of Southern and Central Idaho give way to the densely forested mountains. There’s also much more precipitation as the state narrows between Washington, Montana and Canada.

The region offers solid river fishing at places like the St Joe, the Clearwater and the Kootenai—where the state record for rainbow trout and mountain whitefish was set.

Meanwhile, massive lakes like Coeur d’Alene and Pend Oreille are home to large lake trout, while northern pike can be found in over 20 fisheries in northern Idaho. Priest Lake is one of the northernmost places you can fish in Idaho, it’s also one of the prettiest fisheries you’ll ever find on the planet.

Although, to be perfectly honest, that last line about the ‘prettiest fisheries’ could apply to countless fishing spots in Idaho, but don’t take my word for it. Go cast the day away at some of these places yourself. You won’t regret it.

Originally from New England, Mike McKenna has been calling Idaho home for over 20 years now. An award-winning journalist, blogger and magazine editor, Mike’s first book, “Angling Around Sun Valley,” was named Best Book of the Year by the Northwest Outdoor Writers Association. When not writing, Mike can be found enjoying all the Gem State has to offer with his wife and two young sons.